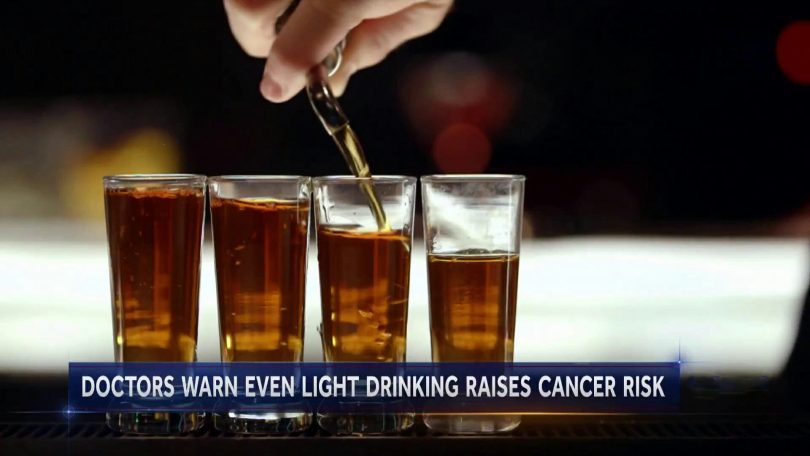 Over the long term, drinking alcohol increases your risk of serious illnesses, such as mouth, throat and breast cancer. Of course, not everyone who drinks will get cancer. But scientists have found that some cancers are more common in people who drink alcohol than those who don’t.

Alcohol can cause Seven types of Cancer :

Heavy drinking can cause cirrhosis of the liver (where damage to the liver causes scar tissues to build up) which can then lead to cancer.

Alcohol use—whether light, moderate, or heavy—is linked with increasing the risk of several leading cancers, including those of the breast, colon, esophagus, and head and neck, according to evidence gathered by the American Society of Clinical Oncology (ASCO).ASCO cites between 5-6% of new cancers and cancer deaths globally as directly attributable to alcohol.

Impact of Smoking in Combination With Alcohol Consumption :

How Alcohol Raises the Risk of Cancer ?

Scientists have not identified any single mechanism that explains exactly why alcohol increases the risk of developing cancer. However they have identified a number of factors that are likely to play a role.

When you drink, the alcohol in your body is converted into a toxic chemical called acetaldehyde. This can damage your DNA (the genetic material that makes up our genes) and stop your cells from repairing that damage, which can lead to cancer.

Oestrogen and other hormones

Alcohol can increase the levels of some hormones in the blood, such as oestrogen, which is linked to breast cancer.

Folate and other nutrients

Alcohol drinkers tend to have lower levels of folate, an important vitamin that helps our cells produce new DNA correctly. Some studies have found that cancer is more common in people with low levels of folate in their blood

Alcohol use during and after cancer treatment :

Among survivors of upper digestive tract cancer, continued alcohol use after diagnosis is associated with a three-fold increased risk of upper digestive tract second primary tumors, and cessation may reduce the increased risk for SPTs in pre-diagnosis drinkers compared with pre-diagnosis non drinkers. In breast cancer survivors, several studies suggest that alcohol drinking is not associated with decreased overall survival, whereas other studies indicate that breast cancer–specific mortality may be increased in at least some subgroups of the patient population. The increase in breast cancer–specific mortality or risk of recurrence has been observed with moderate to heavy levels of alcohol drinking.

Heavy alcohol use and abuse are important modifiable risk factors for postoperative morbidity. Heavy alcohol use and alcohol abuse,compared with no alcohol use, are associated with higher risks of anastomotic complications after colorectal surgery. Alcohol abuse also has been shown to contribute to low quality-of-life outcomes in patients with head and neck cancer after treatment.

Patients with cancer who abuse alcohol have increased comorbidities that can complicate treatment choices and that are affected by alcohol-related subclinical factors, including nutritional deficiencies, immunosuppression, and cardiovascular insufficiencies that increase treatment morbidity.

Does Cessation of Alcohol Consumption Lead to Lower Cancer Risk?

Upper digestive tract cancers indicate that risk of these cancers declines in those who quit drinking alcohol compared with those who remain alcohol drinkers.

Staying in control of your drinking :

Raise the awareness of alcohol as a cancer risk behavior and not to indulge in it.

Here are three ways you can cut back if you have a habit of the same:

Raise the awareness of alcohol as a cancer risk behavior and not to indulge in it.